Summary:  A rare cerebral and hearty science fiction film with charm and thrills, though weakened by the demands of standard Hollywood plotting.

Its chief flaws are trade-offs due to this balancing act.  The paranoid elements gradually soften as the plot mechanics make the titular organization more familiar, and even somewhat friendly.  The Americana of its protagonist’s political ambitions fades out as he falls in love.  So while it lets down two parts in favor of the whole, the film still works because of the strong relationship at its center.  Matt Damon and Emily Blunt have great chemistry and elevate writer-director George Nolfi’s script, which is not bad on its own, into something more believable.  Because we can so easily sympathize with them, the Bureau’s effort to keep them apart — for reasons not unsympathetic on their end — creates real tension.  We may be torn between the Bureau’s point-of-view and our hope for the lovers, but we are never confused.  We know how we want this story to end, and Nolfi executes this dramatic dénouement quite well.  He picks the perfect moment to fade to black.

On top of everything, he manages to invoke an oft-derided (for good reason) but classic plot twist, the Deus Ex Machina, in just the right way.  Done badly, the Deus Ex Machina cheats us, but done well, it seals the story with mystery.  Consider ‘Raiders of the Lost Ark’ and the wrath of God sequence — any other ending, including the one the filmmakers had originally planned, would lack punch and punctuation.

Philosophically, the film’s free will vs. determinism narrative presents a reasonable compromise.  It works as less of a dialog and more of a polemical allegory with obvious Judeo-Christian influences.  This is not necessarily a weakness, as this particular story begs for a conclusion, but there are films that handle the issues in a more compelling way.

Overall, the film is an above-average success.  What it lacks in subtlety and impact it makes up for in entertainment value.  This is sci-fi done right.

Summary:  A Kafkaesque, terrifying exposé of sexual hypocrisy that stands with the best of Kubrick’s work.

Fair warning:  Because of the film’s disturbing subject, I will be handling mature sexual topics.  Be advised.

Review:  Stanley Kubrick’s acclaimed filmography is largely composed of intelligent, penetrating meditations on human nature.  Perhaps the most prominent subject is hypocrisy.  ‘The Shining’ and ‘Full Metal Jacket’ explored our hypocrisy of violence; famously and controversially, ‘A Clockwork Orange’ extended this critique to sexual violence in a disturbingly graphic fashion.  ‘Dr. Strangelove’ satirically blamed its nuclear holocaust on sexually dysfunctional leaders; ‘Eyes Wide Shut’ again attacks the American elite by way of a bizarre conspiracy of cloak-and-dagger sexual politics, and in the process levels a pointed accusation at humanity in general.  We like to think we’re above the basic instincts of our species, but Kubrick would have us know that we’re walking about with our eyes wide shut.  We are sexual creatures, and we’d better be honest about it.

‘Eyes Wide Shut’ defends monogamy, doubtless to the surprise of many self-appointed moral guardians, provided they could settle down for a few minutes to hear it out.  The carefully constructed sexual mythology of human society, and American culture in particular, squeezes the love and life out of monogamous relationships.  For reasons of class and religion, people lie about their most powerful undercurrent, and this results in mutually destructive hypocrisies.  The narrative hangs on two upscale parties held at mansions, the first masking its abusive sexual commerce in hollow pleasantries, the second reveling in open displays cloaked in ritual and threat — the point being, in a dream logic sense, they are the same event.  The multilayered narrative repeats images and themes in a lyrical way, uncovering the uncomfortable truth of each episode.  In the end, the couple has to come to terms with their desires to heal.  To experience true sexual union, stripping to the skin is not enough — they have to strip down to the heart.  Leave it to Kubrick to transform exploitative nudity into an artful statement of the human condition!

Kubrick is often labelled “cold”, but in truth he’s simply objective, standing apart from traditional Aristotelian storytelling because he refuses to digest a given film’s ideas into cheap, predictable, marketable patterns.  This is a film with a happy ending and a clear moral conclusion, but we have to go on an unusual journey to find it.  It was misunderstood in its theatrical release, but like most of Kubrick’s work from ‘2001’ on it has gradually won over critics and cinephiles.  For this reason, I call it a classic — a truly adult film. 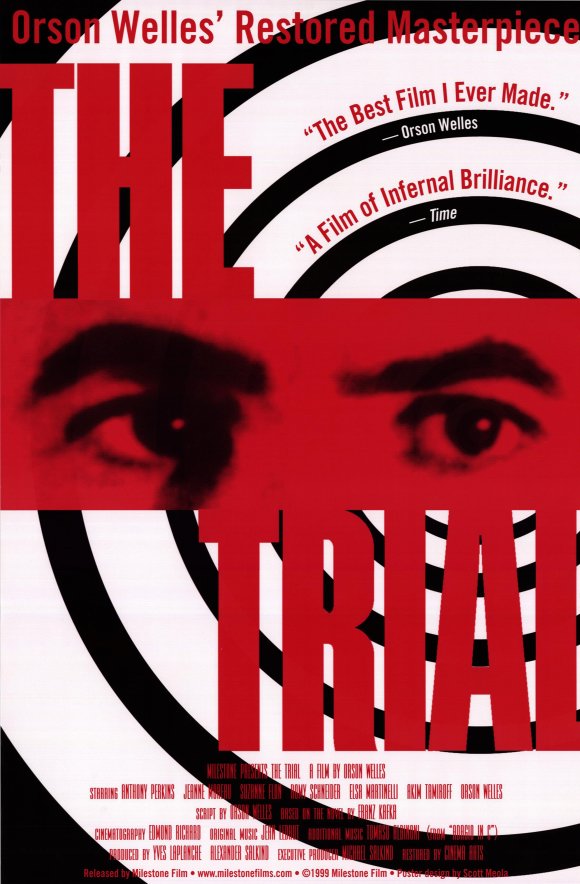 Review:  I have a bit of a beef with horror as a cinematic genre.  It’s typically immature at best and outright revolting at worst, with some blessed exceptions.  Like run-of-the-mill, thoughtless action films, there’s a noticeable separation between the filmmakers and the ethical subtleties of the material; it’s not so much about telling a story as it is about extravagance and extremes, which demands a pushed envelope with every new film.  The filmmakers shrug off concerns about content in favor of impact and, of course, money.  It’s why the standard Hollywood horror film of today continues to devolve into aptly named “torture porn“, the final expression of exploitative ethics.

Now what does this rant have to do with Orson Welles’ under-appreciated masterpiece ‘The Trial’?  In short, this adaptation of Franz Kafka‘s novel is the antithesis of torture porn.  What that degraded form of horror says about the human condition, ‘The Trial’ says the opposite.  And yes, ‘The Trial’ is fundamentally a horror picture, at least in my opinion.  It is surrealistic, nightmarish and psychologically potent.  I had a similar gut reaction when I saw ‘Night Of The Living Dead’.  It is unique, which is more than I can say for most films.  Even today, after over forty years of film history have gone by, it’s only aged like a fine wine, becoming a richer and more profound experience that’s quite difficult to replicate.  Orson Welles’ direction is superb, as per his rep, and it’s packed with fine performances, particularly that of Anthony Perkins in the lead role.

And now, to explore the film’s story, I’ll continue my initial critique.  So what is torture porn’s — and by extension most postmodern horror’s — philosophy?  It’s the withering of human dignity in the face of unspeakable evil, usually embodied in one or a few figures.  It’s utterly vampiric, destroying souls and bodies in the quest for pleasure by the monster at a given film’s center, vicariously experienced — and here’s the real horror — by the audience.  We’re taught to identify with the vicars of decay.  Now, in the other corner is the ‘The Trial’, combining Kafka’s and Welles’ ideas, and its philosophy is the exact opposite.  The lone figure with whom we identify in this universally human nightmare is Josef K., the man accused of an unknown crime, a man who may not be innocent but is sure he is not guilty.  He is an avatar of our consciousness in a lucid dream, running from monsters masked by the faces of lawyers and little girls.  ‘The Trial’ is our subconscious rebellion against the weight of an impersonal cosmic law that offers no explanations and no access to its logic.  Pointedly, the antagonist is the very Advocate assigned to defend Josef.

But of course, ‘The Trial’ is much more than horror, and deserving of review beyond this contrast.  ‘The Trial’ has much to say about religion, law, politics, sexuality, and cinema itself.  It begs for in-depth analysis.  I plan to give it just that in due time.

Reportedly, Orson Welles considered this the best of his whole celebrated filmography.  It’s a shame that it’s been so often ignored by cinephiles and the critical community.  It’s wonderful stuff.