Summary:  Just look at the title—it’s more of what you want from your spaghetti westerns. 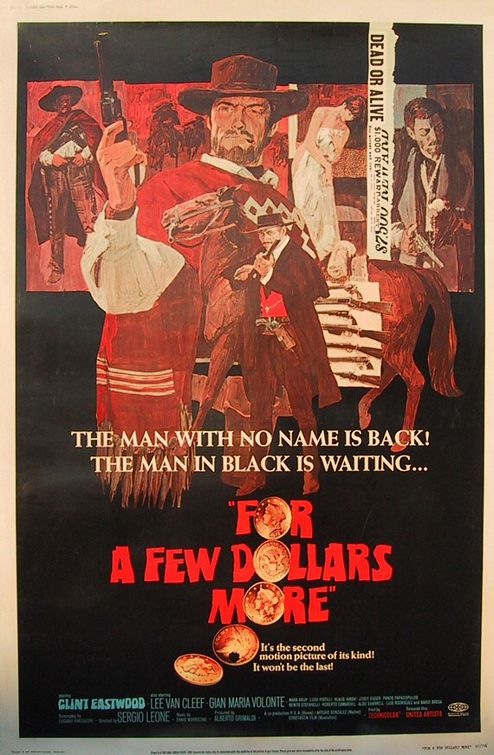 Nobody makes posters quite this awesome anymore.

Review:  He’s back—the Man with no Name.  So are the sun-drenched Spanish deserts, trigger-happy gunslingers, close-ups, showdowns, and over-the-top Morricone music.  In short, everything that’s great about this little subset of the Western genre is here in fine form and is, in fact, better than in ‘A Fistful of Dollars’.

The Man with No Name, again magnificently played by Clint Eastwood, has turned bounty hunter and now wanders the west, collecting buck for his bang on the various outlaws of the frontier.  When the opportunity to collect a fortune on the recently escaped, and certainly psychotic, bandit el Indio (Johnny Wels) arises, he sets out after him.

So has the Man in the Black, however.  A rogue colonel turned bounty killer, the Man in Black (known in the film as Colonel Mortimer and played by Lee Van Cleef), carries with him an arsenal of fire arms and is as deadly with any one of them as The Man with No Name.  He’s after Indio for his own reasons.  Inevitably, the two rivals meet up and are forced to work in an uneasy truce together to catch Indio and his gang.

I have to say that l found this film to possess a much stronger story than in the first movie.  Van Cleef and Eastwood have great chemistry together as competing gunslingers.  Even as they work together, they try their best to one-up each other while doing it.  The result is some very entertaining and amusing moments.  The filmmakers also went out of their way to cast the villain, el Indio, in a more sympathetic light.  A series of flashbacks and a key twist at the end make him more tragic rather than purely evil.  It adds a whole new layer to the Leone west, and it is a welcome addition.  Fans of ‘Fistful’ may notice that the Indio is played by the same actor who portrayed the ruthless Ramon from the first movie.  Although this is a bit confusing to people who are new to these films, these are, in fact, two different characters and should not be confused.

Ennio Morricone returns to score, delivering equally impressive yet also much livelier music this time around.  All the staples from the first film (the guitars, whistling, chanting, trumpets, etc.) are here, but he now introduces some new “twangy” instruments and increases the tempo for a more energetic affair.  To coincide with the deeper and more emotionally involving story, he also wrote very atmospheric and touching pieces which, when played during key scenes, really add to your concern for the story and investment in the characters.  One particular “chime” theme is quite moving.

Lastly, the famous cinematography is back.  The close-ups and the panoramas of desert wasteland are here, and they work as well as ever.  All of the ‘Dollars’ films were very impressively shot and, again, it really adds something special and unique to these movies.

‘For a Few Dollars More’ expounds and improves upon the template set by ‘A Fistful of Dollars’. Attacking on two fronts, it finds itself even more violent and yet also much more involving and moving than the first film.  Refining and bettering what made the first film so great, it is, quite simply, what a sequel ought to be.  In my opinion, it truly surpasses the original.

So it seems that we have a new winner for Best Spaghetti Western.  After all, this film pushed aside the legendary ‘Fistful’ to become the archetypical and bar-setting representative of its genre.  Right?  Wrong.  Just you wait…