I keep chiming in on science fiction topics.  Go figure.  Today it’s the future of the ‘Terminator’ series, which suffered from not one, but two mediocre revival attempts.  Or so I hear, as I have not seen ‘Terminator 3’.  In any case, McG’s ‘Terminator: Salvation’ didn’t go over too well, and now Universal is batting even more revitalization ideas about the field.  SlashFilm has a few words to say about the situation.  My two cents follow below the poster. 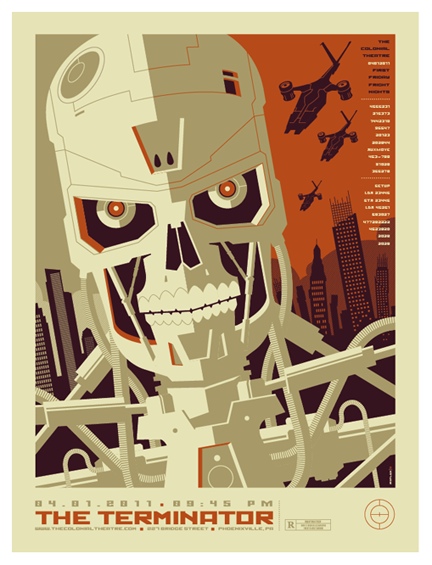 ‘Terminator’ is a B-movie, a synthesis of slasher flicks, apocalyptic paranoia and very large firearms.  It revolves around a simple mythology, the endless conflict between humanity’s messianic defender and the ghosts in an army of machines, a war that spills out into logic-defying time travel.   It’s the worst case scenario of the Computer Age as conceived circa 1984.   Every subsequent installment revisits these themes and, rather than manipulating them into new, terrifying shapes, allows them to stagnate.   By ‘Terminator 2’, James Cameron’s final entry, it was obvious that the concept couldn’t go any further in its present form, so Cameron intended to let it go.   The film made a lot of money, however, so those blessed with the franchise rights were determined to keep it alive.   The next two sequels, separated by margins of 12 and then 6 years later, respectively, undid Cameron’s imposition of finality and then undid themselves.  What was necessarily convoluted has become hopelessly confused.

‘Terminator: Salvation’, though, was on the right track.  It brought us into the glimpsed post-apocalyptic war.  It did not deliver on the suspense implicit in the scenario, however, proving largely toothless and shifting the focus from messianic John Connor to a previously unknown character.  When we should have experienced the horrific urgency of Connor’s war, instead we visited yet another illogical time travel plot.

So, should ‘Terminator’ be left to rot?  I don’t think so.  All stories are reinventions.  I don’t find it necessary to complain about sequels or reboots in themselves, only to deliver justified criticisms when they go typically wrong.  There’s no reason a crack team of filmmakers can’t rightfully reinvent ‘Terminator’ to channel the original’s suspense and push the story in an unprecedented direction.  ‘Terminator’ can live again, but it must become unpredictable, passionate and adult.  It should be dangerous.