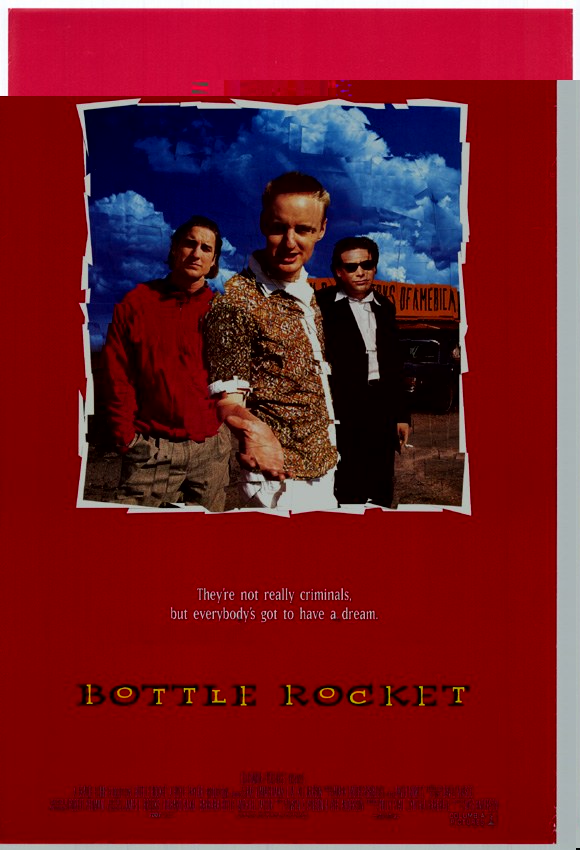 Review: If Frank Capra and Quentin Tarantino were kidnapped by a time-travelling Vincent Price and spliced into a single director, that entity would be known as Wes Anderson. In ‘Bottle Rocket’, his first feature film, which he co-wrote with lifelong friend Owen Wilson, he crafts an audacious and humanistic comedy.  When a filmmaker really loves the story he or she is telling, it shines through, illuminating all the premise’s cracks and corners.  This is one such work of love, bearing marks that have come to define Wes Anderson as a real auteur, a creator with a distinct voice.

‘Bottle Rocket’ is about three young men who sort of nonchalantly decide to become thieves.  The twist is, unlike most films with similar ideas, the trio aren’t what we’d call bad people.  In fact, despite comic indiscretion, they’re brighter, more optimistic and more ambitious than most young guys I know.  Their chief flaw is that they don’t really understand the problem with theft.  To them, it’s just another cool entrepreneurial venture.  In a lesser film, such a quirk might sink the narrative, but the writers are savvy enough to turn it around for their benefit.  By freeing the story from overt self-criticism, we’re able to spend more time experiencing the story from the characters’ perspectives.

This is basically a coming-of-age story.  The trio all find ways to define themselves in the end, though it takes time and the temerity to overcome an inevitable series of disasters.  One of the young men finds love with an uncommon maid at a motel, and their courtship is my personal favorite onscreen romance.  The film’s philosophical bent is towards a healthy humanism; in short, people are good. It’s common in the western world, due to Western Christianity’s influence, to forget this simple truth in pursuit of moral excellence.  Whether conscious or not, ‘Bottle Rocket’ makes for a good counterattack.  This idea of human normalcy being extraordinarily good in itself spills into the cinematography.  The compositions are great, filled with all the colors of the rainbow, well-arranged and brimming with good humor.

The film’s also pretty accessible.  The only hiccup is the language, which is occasionally very vulgar.  There is a “sex scene”, but I put that in quotes because it is not intended to titillate (it tastefully lacks nudity or any footage of the act), just to beautifully culminate the relationship.  It’s not about carnal passion, but joy, and that kind of emotion is rarely, if ever, employed for sex scenes in film.  I was pleasantly surprised by Wes Anderson’s discretion.

I highly recommend this film for young men on the cusp of adulthood.  It’s hilarious and packed with insight.

Buy It From Amazon!: Bottle Rocket: The (The Criterion Collection) [Blu-ray]